Here are the final registration numbers for the 2022 KFC event.

The Katy Flatland Century is promoted and sponsored by Northwest Cycling Club. It is one of two rides that we organize each year to promote cycling in the greater Houston area. The proceeds from this ride go in various directions, are predominantly cycling related, and are naturally subject to the profitability of the ride.

Boy Scouts in our area use this ride as a major fundraiser. We budget an amount for them each year and if the ride turns out more profitable, we increase the donation to them. The troop has volunteers, scouts and parents, manning our rest stops and start/finish area.

In addition to the above, NWCC sponsors weekly rides, open to not just club members but all cyclists – new and old – beginner to advanced. On a typical, good-weather day, it is not uncommon to see over 200 cyclists show up for our Saturday rides. Throughout the year, NWCC also organizes cycling educational classes and skills clinics and, of course, a host of other cycling related activities.

So, as you can see, NWCC is all about giving back to the cycling community and for the advancement and education of cycling in general – from local to state and nationwide. It’s the funds from our annual Katy Flatland Century and Bluebonnet Express events that allow us to do these things.

These are 2022 KFC photos of our new member Wendy Larsen. Geoff Donnelly has been a bike guide for her at the Houston Marathon and other races for a good few years now. She has won the Boston Marathon AWD race for the last two years, setting records each time, and she did the Katy Flatlands Century ride this week with her three bike guides, who we comped in for a free ride. This is her after the ride. 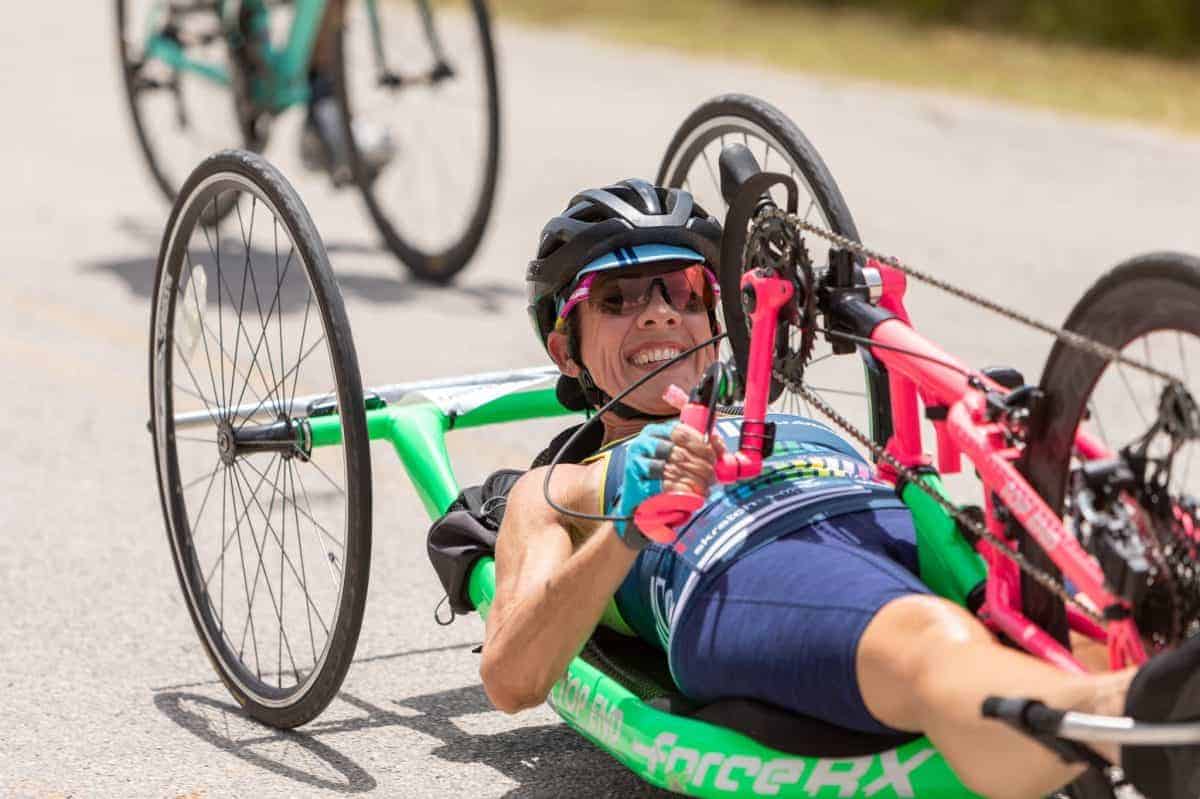 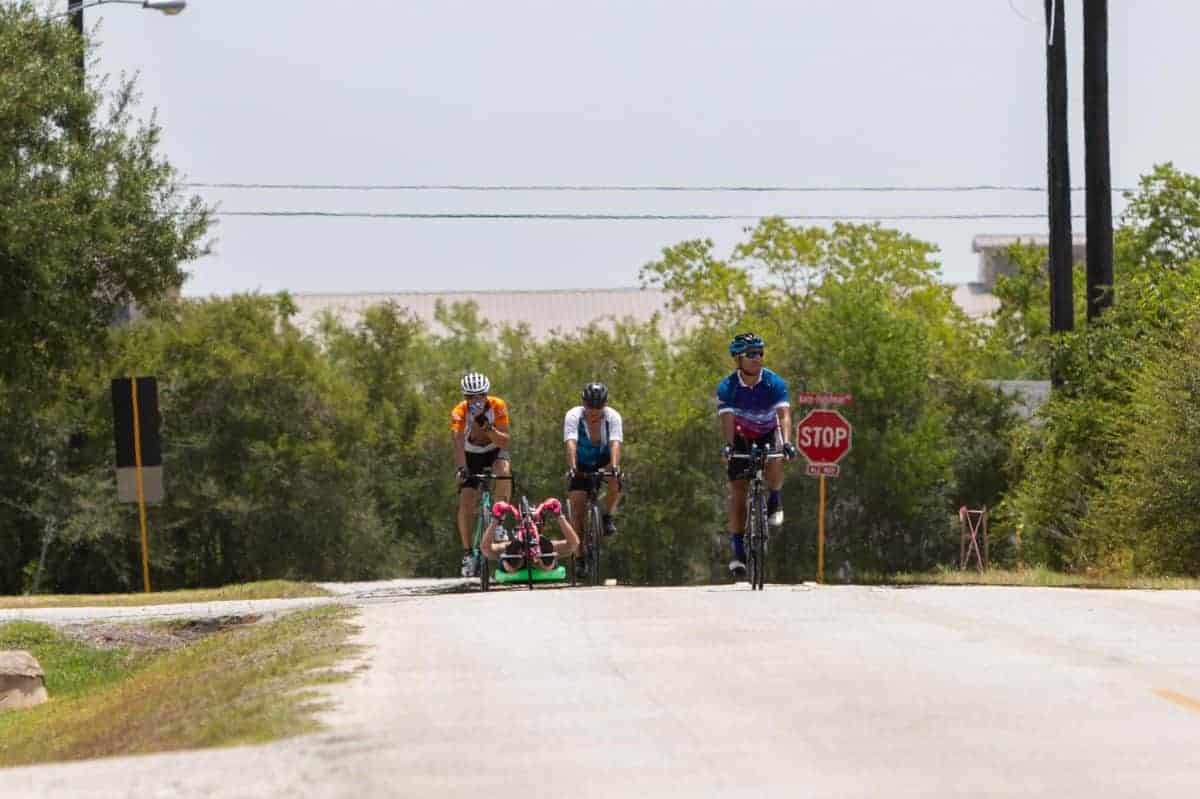 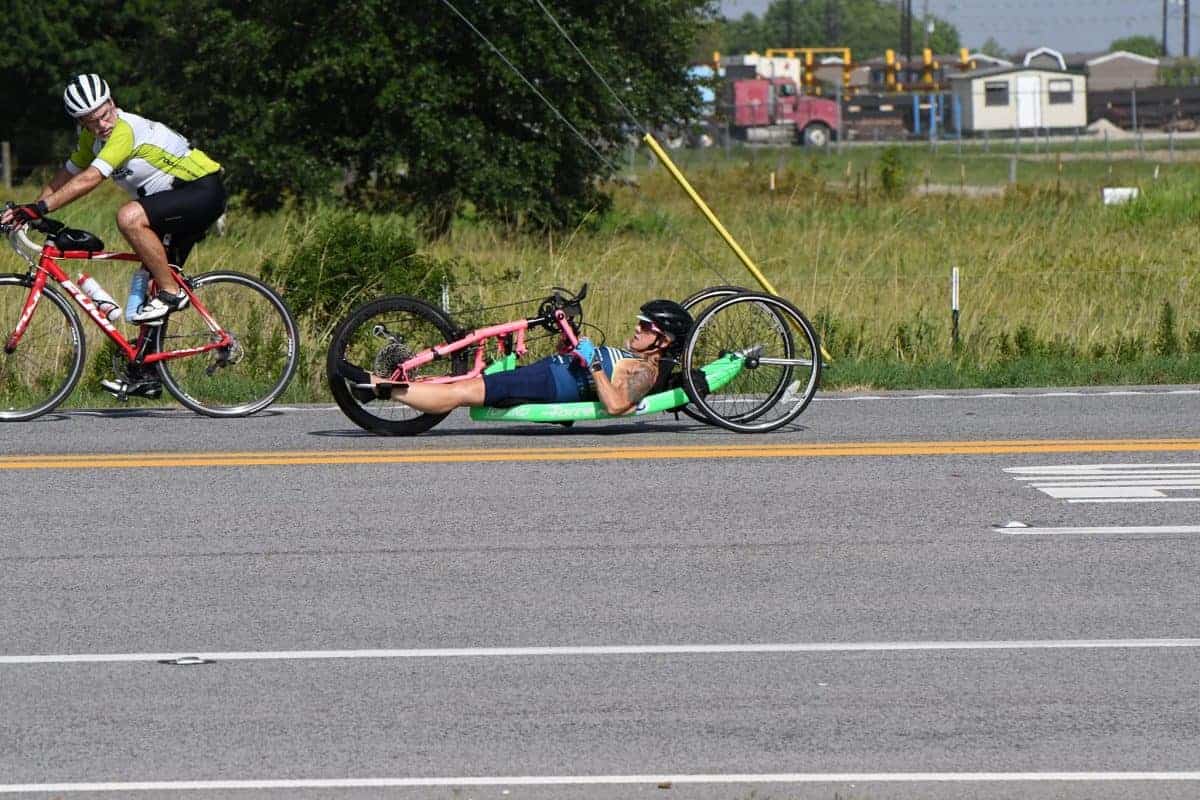 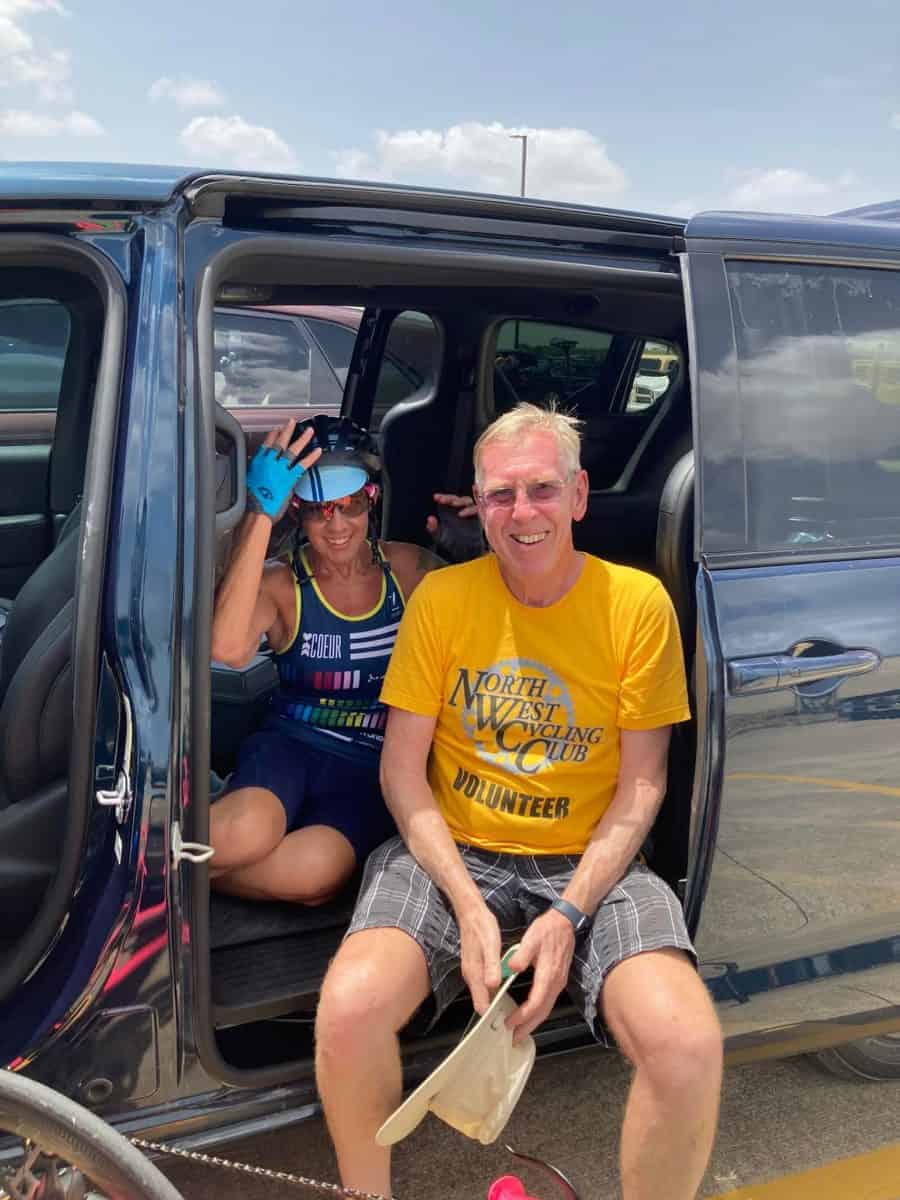 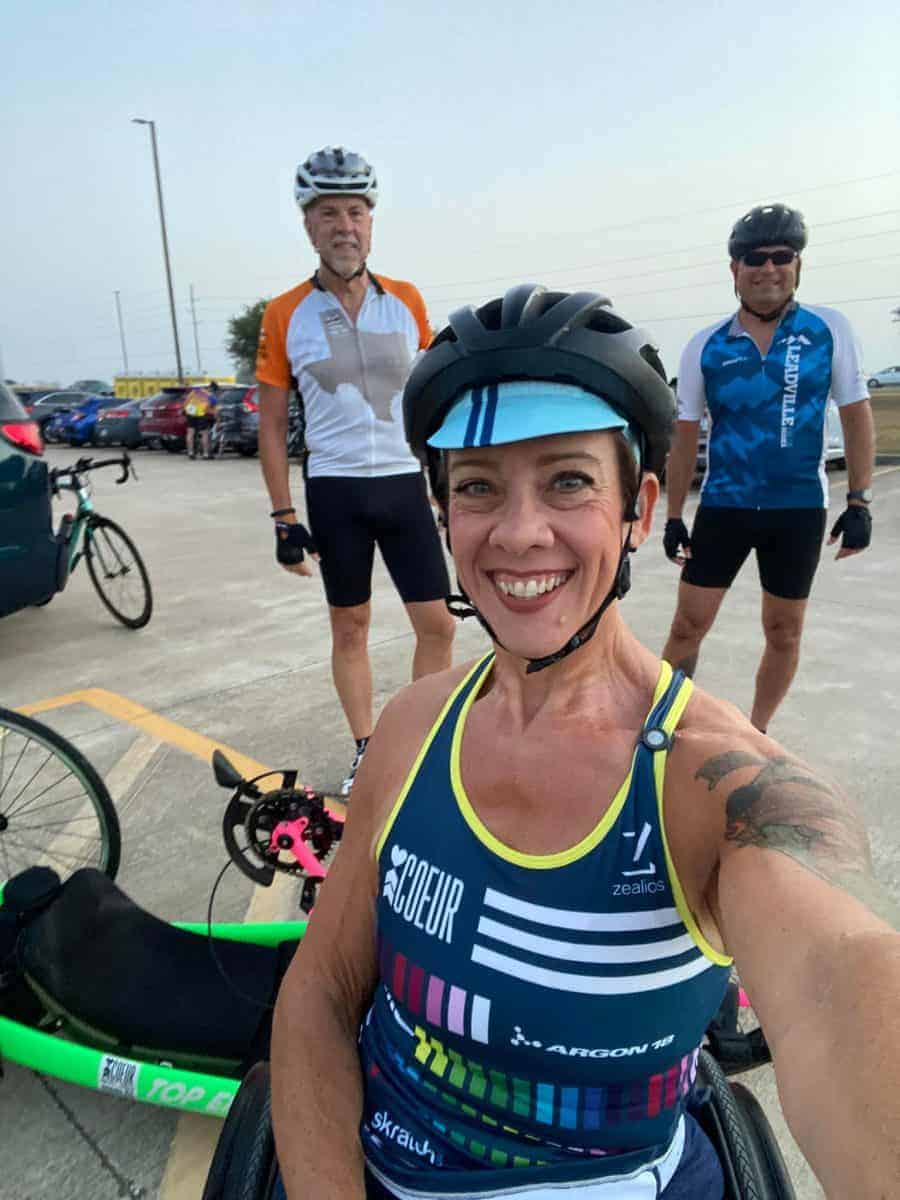 Century ride report, for those that are curious about the nitty gritty:

It started off with everything going according to plan. Miles 1-33 everything felt FANTASTIC!! Nelson kept having to remind me that I wasn’t allowed to go faster than 17.5 mph, but my perceived exertion was so low, I honestly thought I’d be able to maintain an average of 17.5 mph for the entire ride. Wrong!! I originally planned to stop at the first rest stop, but instead decided to skip it and head to rest stop 2. That’s when things started to go downhill.

When we left rest stop 2 at mile 33, we had to go down a dirt/gravel road for what felt like forever. I had no idea part of the route would be on a dirt road and it threw me for a loop. I thought the worst was over when the dirt road ended, but then the semi-paved road got so bad that it might have been even worse than the gravel road. It slowed me down to a crawl. I think I was doing 5mph at one point because the surface was so jarring that it was downright painful on my back. By that time, it was getting hotter and windier by the minute and I was in pain. That gravel road really did me in for the remainder of the ride.

Mile 51 was rest stop #3, so we stopped there, cooled down, used the bathroom, and were off again feeling good.
Once we got back on the road, we had much better road surfaces. Thanks goodness!! We also were now going into a headwind that was getting stronger by the minute and the heat was continuing to build. I was feeling pretty good again, but that wind definitely slowed me down and I knew I had to pace myself or crash at the end. By that time, it was just a mental of game of wanting to get it over and done with vs being smart about not pushing too hard in the wind. We were riding through some of the most boring roads on the planet. It was new housing developments with rows and rows of cookie cutter houses that had no landscaping yet and these God-awful traffic circles that all looked identical. It was like being in Groundhog Day!

Geoff Donnelly came and found me on the road here and also got to witness my minor wrong turn and bonus mileage. 🤣 Seeing him was a nice reprieve from the monotony!

We road through rest stop #4 at mile 64 and didn’t stop. I was still physically feeling good and just wanted to get it over and done with.

Around mile 70-75 I started feeling very nauseous. This hasn’t happened in a long time, but I could tell it was heat related. I slowed it down, but not sure with that kind of heat it even made any difference. The feels like temp was over 100 by now. I knew the next stop was at mile 82 and I just had to get to that stop.

As we pulled into the rest stop I saw my friend Debbie Blume Rychlik on the side of the road cheering me in. What a nice surprise!! I immediately got ice and frozen water bottles from Chris who was meeting me at each stop with my wheelchair and coolers. He filled my cycling cap with ice water and I put that on. I put a frozen water bottle down my bra, I grabbed a couple of frozen water bottles and just held them in my hands. I put one on the back of my neck. I had some water, but couldn’t get down any of my pre-planned Skratch rice cakes, Sport Hydration, and Superfuel, so no calories. At that point, I was just happy to keep the little bit of water down, though. I chatted with Debbie while I got cooled down. That ended up being another 20 minute stop while I cooled off. Once I got cooled down though, I felt so much better!

The next 10 miles felt better and my nausea was gone, but I didn’t push it too hard as I was worried about the heat. I took a couple small sips of my Skratch Superfuel from my hydration pack, but didn’t get much in, to be honest.

About mile 90 is when the nausea hit again. By that point, I knew I only had 16 miles to go and I can do that in my sleep. I also knew though, that the heat and wind was no joke and I needed to be careful. There was one more rest stop, but it wasn’t until mile 102. Thankfully there was a random stranger on the side of the road about mile 95 with cases of water, coolers filled with ice, and cold beer for the riders. My guides grabbed a cold beer (Thank goodness I vetted these guys and knew they were fully up to the task of riding this distance in brutal heat). I stuffed my bra with ice (No shame!!) and got going again. Thank you random stranger!!! This is also where Liz McGlynn found me and stopped to say hi. Thank you Liz!!

When we got about 2 miles from the finish, I decided what the hell and sprinted toward the finish. I had to see if I still had enough in me after that hellish 100+ mile ride to push over 20 mph and I did. Oh, yeah! This woman can work when she needs to! 😎💪 Unfortunately, I didn’t go quite fast enough because right before I finished the wind blew the finish arch away, along with all the club tents, banners, etc. No finish line for me! 🤣 Did I mention the wind?!?! 😱

All in all, I can’t say that ride was fun. It was long, hot, boring, painful, and windy. However, setting a big goal and achieving it is always fun! Challenging myself is fun! Pushing through and doing really hard stuff is fun! Most importantly, it was a learning experience and gave me great information on what I need to work on going forward with far bigger goals to achieve. Would I do it again? Hell yes! Those are the types of experiences that teach you how to handle whatever is thrown your way, how to be mentally prepared, and how to adapt and overcome.

I finished with an average rolling speed of 15.5 mph. It wasn’t anywhere near what I wanted it to be, but I’m feeling pretty good about my effort considering the conditions and I feel like I did a good job of not pushing myself past the point of no return. I did what I had to do to finish strong.

Today I feel pretty darn good. I’m a tad sore, but really no big deal. My back is painful from the road conditions, but my shoulders and arms are fine and that’s the important part. 🤣 If I had to go ride another 100 miles today I could. It wouldn’t be pretty, but I could get it done. More than anything, I feel like my brain is fried today. It was a mental exercise for sure!

Now to rest and recover this week, because my coach is a slave driver and is making me. 😜🤣

ETA: The dirt and gravel road was due to a last minute course change because of construction that the club wasn’t made aware of. Totally not their fault. I read the email and downloaded the new route, but conveniently ignored the part about it being a dirt/gravel road. It is what it is and was good for me to be faced with challenges like this. I need the mental workout as much as the physical. 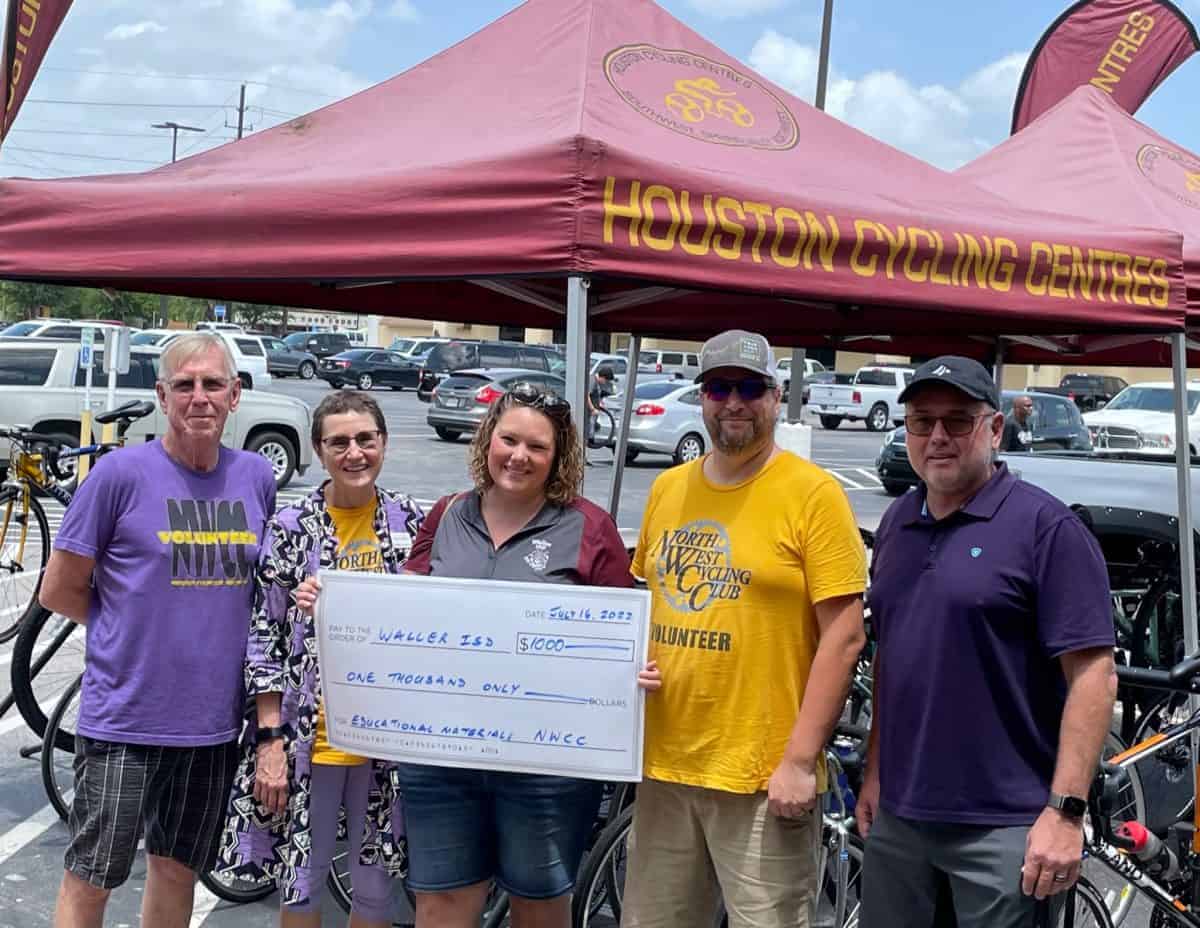 The KFC has taken precedence over everything the club has done for many weeks now, but we still found time to make a presentation to Brandy McWilliams of Waller ISD on Saturday during all the ongoing effort. Brandy is leading the the initiative to support Waller ISD’s kids with a Back to School Fair taking place on Saturday July 23. It will help students with “providing backpacks stuffed with supplies (glue sticks, pencils, crayons, folders, composition notebooks, scissors, erasers and more).” NWCC has contributed 10% of their target fundraiser. 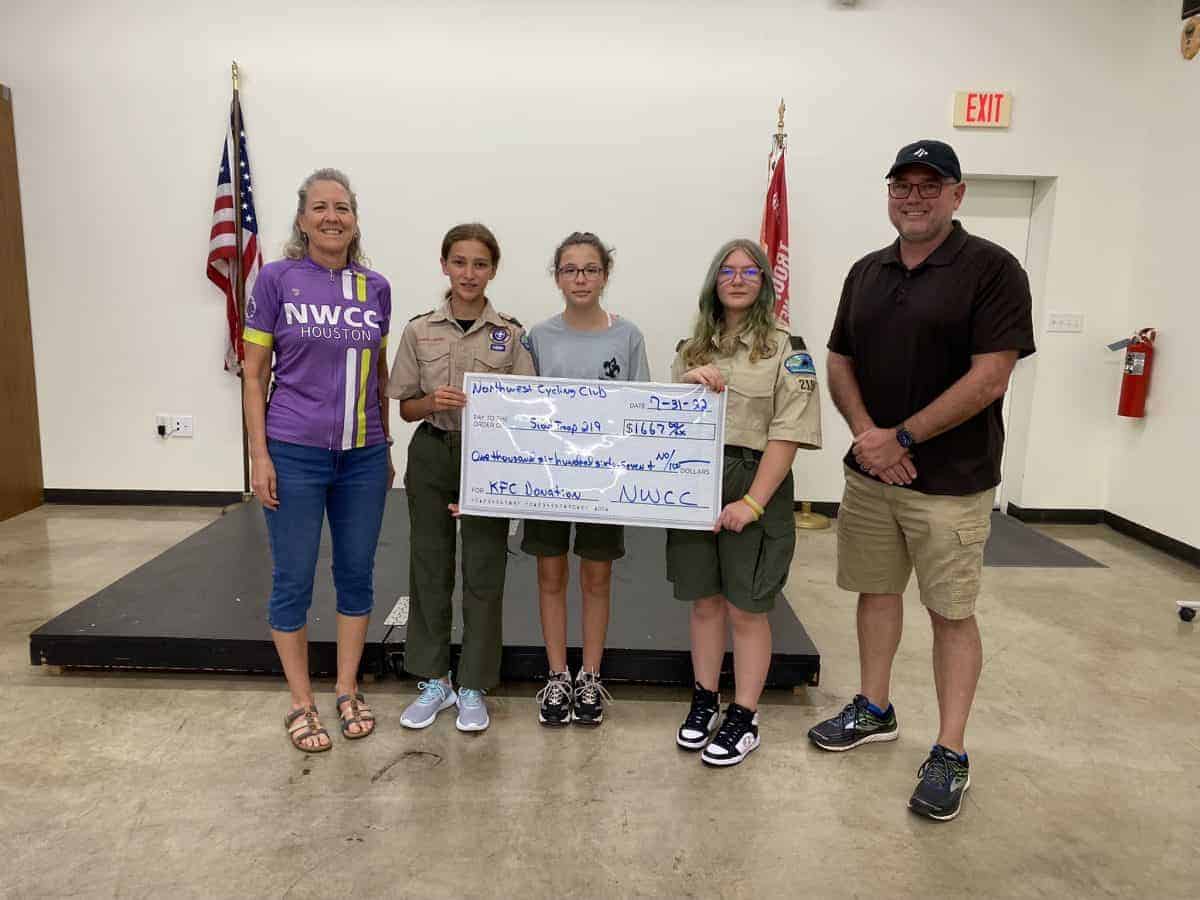 The NWCC donated $1667.00 to Boy Scout Troop 219 for their help with the 2022 Katy Flatland Century (KFC). The scouts and their leaders volunteered their help by manning Rest Stop #1 along the ride.

The NWCC donated $833.33 to Boy Scout Troop 567 for their help with the 2022 Katy Flatland Century (KFC). The scouts and their leaders volunteered their help by manning several rest stops along the ride.

"The Katy Flatland Century is promoted and sponsored by Northwest Cycling Club. It is one of two rides that we organize each year to promote cycling in the greater Houston area. The proceeds from this ride go in various directions, are predominantly cycling related, and are naturally subject to the profitability of the ride."